My 7 year old decided she wanted to get her ears pierced. It was first raised quite a number of months ago but I dismissed it saying she was too young. I’m definitely not the type to be piercing a baby’s ears but each to their own. Maybe when she was older – and she could pay for it by herself.

I knew I wouldn’t be able to resist long term. I got my own ears pierced aged 7 too. I used my First Holy Communion money. I tried to play that card, suggesting she gets them done after her Communion knowing the age for the event has increased by a year since my time. But, since she turned 7 at Christmas and accumulated enough money in gifts she began her campaign. She is quite persistent – I’ll give her that. A trait my own mother says she has most definitely inherited from me. I guess this is where the karma bites you on the backside! Payback for the years of tormenting my parents stretch out ahead of me.

It is barely over six weeks since her birthday! We managed a measly six weeks and finally caved last Friday. Despite the numerous Claire’s Accessories vouchers she got between Christmas and her birthday (thinking that’s where she would eventually get it done) we ended up bringing her to our local Life Pharmacy. It was a lot cheaper and I figured there was some medical awareness there as opposed to getting the ears pierced amongst One Direction merchandise. The pharmacy had a consultation room which could have passed as a Doctor’s office.

She was excited but nervous as we made the journey in. She brought her American Girl Doll – the birthday present from us – as morale support. She picked her earrings and the preparations got underway.

Her ears were cleaned, the equipment prepared and marks placed on her ears. I was asked to approve the placement and asked for a little adjustment.

Once ready to start they called in a second piercer. A genius idea they give you the option to get both ears done simultaneously. One too many sine pierced ears from kids refusing the second shot!

They didn’t even tell her they were about to do it. I mean she knew it was imminent as they picked up the guns but there was no “right here we go!”, no countdown – nothing. They just clicked, bang and said right you are done. Hey presto two pierced ears. 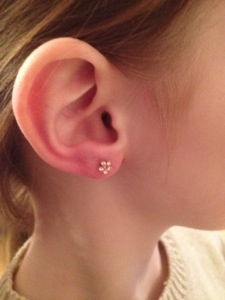 My little lady looked a little shell shocked but pleased as punch!

She got her after care instructions and paid her dues and away she went.

As I looked at her ears I couldn’t help thinking I was wrong to ask them to amend the position. Although maybe I’m being paranoid – my husband, mother and most importantly my daughter think they are just fine!

Now I’m sure she will be hounding me for something else! And my two year old announced she wants her ears pierced at age 4!

What do you think of kids getting their ears pierced? Love it or hate it?

Newborn Sleep (or lack of it for Mammy and Daddy!)