It’s all about the linkies around here.  If truth be told my own inspiration is lacking a bit due to me still trying to snap out of holiday mode but thankfully another great blogger in the form of The Busy Mamas has given me the inspiration to create another blog post with her Imagining the New Year linky.  Having looked at 2014 with Where wishes come from the obvious thing to do next is look forward, imagine the New Year.  Which is exactly what I am going to do.

January is the most fabulous time to look forward and dream about all the things you want to happen in the New Year.  The New Year is just stretching out in front of you and any dream is possible if you put your mind to it. It is also a great time to set goals and that dreaded word, resolutions. 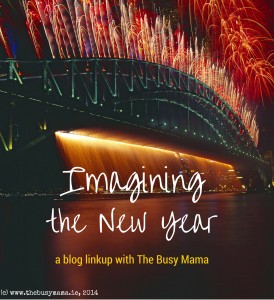 I have a little bit of a head start because I already set new school year resolutions back in September.  To be honest my 2015 goals and resolutions are very much a continuum of them.  As a start I should reflect on what I set back then.  I set five resolutions.  You can read them in full here. So, how did I do?

Average.  I am a bit of a phone addict but I did make an extra effort not to be checking in and out on my phone.  It is hard.  I guess it is a bit of an addiction but I will be making even more of an effort for 2015.

There were highs and lows.  I had some weeks where I did reduce my consumption by a large percentage but it was more from circumstance as opposed to a conscious effort on my part.  One thing I have done is start to drink lower alcohol wines.  Every bit counts.  It was a heavy Christmas alcohol wise so the only way is down for 2015!

Again, rather than conscious effort there were a number of events that led me to have some me time.  I got away for a night out (including overnight in a hotel) for a friend’s hen party.  It was fun and the time away from the kids did me good.  That said I had only just had a whole weekend away for my ten-year wedding anniversary.  In addition I got another night out in October when I got to attend the Blog Awards.  Those nights aside I tried to make time to do some nail polish on my nails.  Go for some walks by myself and if I’m honest I was the better for that.  I will definitely be making more time for me in 2015.  This time in a more structured, ordered way so it happens regularly rather than on an ad hoc basis.

Loosing weight was a big thing for me.  After taking my career break a few pounds crept on as a result of a great summer which included two great weeks in Tenerife.  There was Christmas 2013 and snacking at home, another summer and another couple of weeks in Tenerife.  Before I knew it I was almost a stone heavier than when I left work.  My weight peaked in October and I knew I needed to do something about it before Christmas, when inevitably another few pounds would go on.  After a concerted effort I lost 8lbs by Christmas.  Of course 3 lbs are now back on after the last 2 weeks of indulgence but I’m 5lbs net lower. If I can do another 5lbs-7lbs in the first quarter of 2015 I will be well on my way to my ideal weight.  I have the target of my oldest’s First Holy Communion in May to try to look and feel my best.

I had, in September, just signed up to a Power Productivity Programme by Alejandra Costello.  A (wanted) present from my husband for our ten-year wedding anniversary.  I set about going through the documentation, videos and exercises and have done okay getting through it.  I now feel I have the tools to be more productive I just need to put it all in action.  A massive thing is to de-clutter the house.  I had hoped to start before Christmas, before the onslaught of more stuff, but unfortunately I didn’t.

I am terrible for hanging on to things “just in case” or because I am emotionally attached to the item.  I have an attic full of baby things and while I can be okay at clearing stuff from rooms they end up packed away in the attic.  For once and for all I will, in 2015, make my way through every room and de-clutter and reorganise, putting in place systems that will work for all of the family to keep organised.

It’s not going to be an easy task.  My big problem in the past has been thinking I can just go tackle a room in a day but what I have learnt from Alejandra is to be realistic.  Clutter that has accumulated over a decade is not going to disappear in a day or a week or even a month.  I have to set myself realistic targets about what I can achieve especially when there are the routine tasks of school runs, washing, hoovering, after school activities and a blog to maintain.  By breaking down the mammoth project into small bite sized chunks I can and will do it.

I am going to prioritise; room by room and section of room by section of room.  The list will be big but if each job on the list is one hour or less it will make it much more manageable and also leave me motivated to do more if I can start ticking things off the list.

There was also mention of an exciting new project.  To give a little hint I am working on a new website that I will be launching soon.  It has been a bit slower developing than I had planned but 2015 will be the year I hope to have it live.  And early 2015 at that! Watch this space.

So, that’s where my school year resolutions are at.  Do I want to add anymore specifically for 2015?  On reflection no.  If I can zone in further on these five and take each of them to the next level, even by the end of the school year they relate to, than I will be very happy come the close of 2015.

Happy New Year.  I hope everyone achieves what they dream this year.