Tomorrow Wednesday the 28th October, it’s my birthday.  My brother loves me so much he is going to celebrate my birthday for 36 hours.

To clarify, he will remain stuck (read celebrating) on the 28th October for 36 hours.  For me, my birthday will come and go but like the dedicated brother he is, he will keep on celebrating.

He woke up in Singapore at 1.30am on the 28th October and started celebrating my birthday including obligatory message on Facebook.  It was still 5.30pm on the 27th October for me.  So no celebrations just yet. 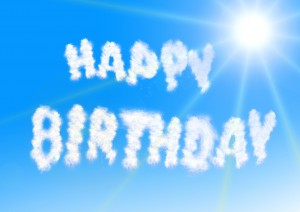 Over the next number of hours he will be travelling east, via Korea. He will land in San Fransisco at 12 noon local time, on the 28th October.  During his travel to San Fransisco he will be passing the international date line so there is a possibility he will go back to the 27th October before re-entering the 28th.

Later in the afternoon he will travel further east to Washington DC which is a further 3 hours ahead and land at 11pm on, you guessed it, 28th October as he spends his final hour on the 28th October 2015.

So, in case like me your brain is well and truly melted by that, basically he is starting my birthday 8 hours before me and as a result of his easterly travel across multiple time zones he will continue to celebrate the 28th October for 4 hours longer than me; a whopping 36 hour birthday celebration.

A card and text will be fine next year bro!  But thanks, love you too!! x