Earlier this week we got the opportunity to have a trip to the theatre to see the latest production, Granuaile, Pirate Queen, to hit the Axis in Ballymun, Dublin.  Certainly a far cry from our usual Tuesday evening.  A quick bite to eat and we hit the road to Ballymum which is only about a 15-20 minute drive from my house.

We eventually got parked (after a bit of parking confusion!) and made our way to the theatre.We were very warmly welcomed and the kids immediately jumped behind the pirate scene for a photo opportunity.  My kids are not shy!

There was a lovely waiting area and once we were called in we made our way down an atmospheric tunnel not really sure what to expect.

The seating was laid out in a square formation, the kids on benches facing the action which took place in the middle making it all very intimate and great for the audience participation that was to come.  The mood was errie and intriguing with dark lighting and dry ice (maybe a little too much dry ice at certain moments!). 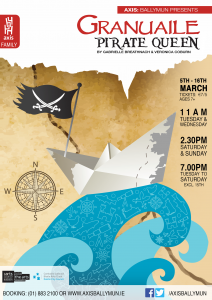 The show kicked off with Gabby, sorry Gabrielle! (in joke, you need to see the show!) and her brother Karl chatting about their own lives and the respect (or lack of) each other has for what they do in life.

The show moved through the story of Grainne O’Malley (Grainuaile) and her life on the seas from her early age insisting that being a girl was no reason not to take to the seas right through to her elder years and her visit with Queen Elizabeth I.  With only two actors, basic set design and props the show relied on very well delivered storytelling and the imagination and participation of the children at the show.  My oldest daughter was only thrilled to have gotten to hold the baby that Grainne delivered on the high seas during a violent battle.

All of the kids were very directly included in the final minutes of the show as they created and boarded a virtual ship and helped to row Grainne to visit Queen Elizabeth I.  Although my youngest was tired at this point and only wanted to snuggle into Daddy; I think she was the only child not on the boat!!

Overall as an adult I really enjoyed it.  It was like nothing I have ever been to before and the Axis is a really lovely theatre with this show being really nicely put together.  My oldest daughter absolutely loved it!  She was still raving about it when we got up to go to school the next morning.  My little man enjoyed it though he found certain bits in his words “a bit boring”.  There are probably parts that are “boring” or a little over the head for the younger kids to get their head around – not a criticism of the show, just a fact of life that younger children don’t get things and this is clearly acknowledged by the show makers who are marketing the show at ages 7+ and I would agree with this recommendation.

There are some really lovely messages that older children would definitely take away from the show about following your dreams and not letting your gender hold you back.  Very apt given we went to see it on International Women’s Day.

At €7 for an adult and €5 for a child it is good value for money.  We went to a 7pm show which, on a weekday, may have just been a little late for my 4-year-old however there are daytime shows too which would really suit the younger members of the audience.

It is definitely a show that would make a great family morning, afternoon or evening out.

Check out all the details below:

Disclosure:  I attended the show as a guest of Axis however all content and opinions are my own.

Getting away from it all at Lusty Beg Island [Review]