I got to attend the Dublin Web Summit at the end of October.  A huge tech conference where the giants of the technology world (think Facebook, Twitter, Skype – you get the picture) and start-ups get together in one place

One such start up I came across was KeepyTM.  As a mommy blogger it appealed straight away.  An app, launched in September 2013, that you can upload, store, organise and share your kid’s artwork, school work, photos, video and other keepsakes in a private Memory Playlist.  I am sure I am not alone in often almost drowning under school projects and art work.  The older my kids are getting the more of it I am accumulating and it’s not going to get any better.  What makes it worse is I am very sentimental and find it hard to let go – even though it might just be a piece of paper with a few scribbles; I treasure it.

Unfortunately when I called over to the Keepy stand at the Web Summit I missed meeting Offir Gutelzon, Co-founder and CEO who was in attendance at The Summit.  He was busy preparing for the start-up Pitch competition running at the event.  Offir obviously did a great job and took a runner up prize.  I managed to catch up with him a couple of weeks later via a Skype call across the Atlantic to have a chat about Keepy, his own journey so far and the future.

Offir was the founder and CEO of his previous company PicScout, an image tracking and identification company, until 2011 when he sold it to Getty Images.  It still operates as a subsidiary of Getty Images now.  He moved to New York with his wife and two kids (now 4 and 7) and quickly realised the problems of accumulating art work and projects.  With his background as a techie dad and knowledge of all things image related Keepy was born.

The name Keepy is, as Offir explained, based on the word keepsake but is a  more childlike version – it is short and catchy and an appropriate name for this new app. It is being pitched as an intergenerational platform which allows families to create their own private memory playlists.

Keepy was launched on iOS earlier this year.  I have had the opportunity to try out the app as it is free to download.  My only stumbling block being that I had not yet upgraded to iOS7 (just didn’t like the look and feel) and when my husband did, his iPhone stopped working (probably completely unrelated but certainly put me off).  I am now upgraded and Keepy is installed.

The app itself is very intuitive and as Offir noted the big difference between Keepy and other solutions is the emotional aspect – being able to record voice tags and allow your little one to tell the story behind the picture, capturing their voice at that time, as well as the ability to have video responses and comments to the Keepy.  Grandma or Grandad can add little messages to express their pride or how impressed they are with the work!

One of Offir’s favourite Keepy’s of his own was a little piece of artwork by one of his kids – but not just the artwork itself but it was the comments and messages around the Keepy that made it so memorable – so not only do you get the Keepy itself but a whole package of memories wrapped around it.

I love the ability to share easily on the likes of Twitter or Facebook too and love the way it arranges the Keepy’s by kids and by age.  I can just image handing over years of neatly chronicled memories to each of my kids in the future. 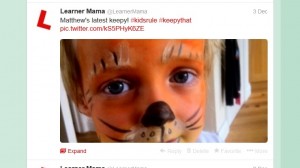 Of course this is a commercial venture so there needs to be revenue.  The busines model does involve a subscription based service however the new model launched allows 31 free Keepy’s per month – so unless you are particularly snap happy it is perfectly feasible to keep using Keepy for free forever.  If you want that bit extra you can pay a montly premium of $1.99 per month for 101 Keepy’s and $2.99 per month for unlimited Keepy’s.

Offir has managed to secure funding in excess of $1.1 million for the development of the product – a testament to the support his investors have in the concept.  Offir himself told me he hopes to see many years of Keepy into the future – he will certainly have a large collection to hand over to his kids when they reach adulthood!

Of course they will be those that will be weary of something like Keepy.  What if it fails? What if a technical issues means that the Keepy is lost?  Unless you plan to keep every piece of artwork that crosses your door (I recommend not – I am beginning to become overwhelmed by artwork in this house – the time has come for a massive clear out!) then without Keepy you lose the work anyway.  With Keepy you get to capture the image and record a voice that as it grows will also change and be lost forever.  Not only that, you can back up your items to Dropbox – Offir assured me that much of the investment went into creating a solid backup system.

So what about the future?  Offir appears exceptionally committed to Keepy and excited about the future.  The Android version of the app has just been released to the app will be available to a whole new audience.  Not content with just helping to organise and store your Keepy, a partnership was also announced today with Zazzle to offer the thousands of Keepy users the opportunity to turn their favourite Keepy into a gift such as a mug or smartphone case.  As this is an integrated partnership solution the user (or relative) will be able to click straight through to buy available gifts.  If you are based in the US place your order by 20th December and have the gift on time for Christmas! 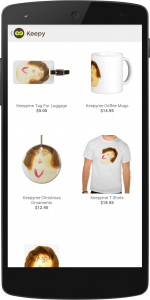 And of course the future looks bright – even if Offir manages to target all the parents of the world it seems there is demand from teachers for the app to manage school art portfolios and also from dedicated pet owners!

The app is available:

In the iTunes app store:

And now on the Google Play Android Platform:

Note: I was not asked or paid to write this article.  The app is one that grabbed my attention and from trying the app for myself I think it a great one to share with my readers so I hope you enjoy it.  I am exceptionally grateful to Offir Gutelzon for giving up his valuable time to chat with me.

Have courage and be kind: Cinderella 2015 [Review]