Being a parent comes with its challenges.  Lots of them.  There are times when things happen that make you feel bad.  Like really bad.  Guilty, upset and a truly terrible parent.  Of course, this is rarely the case.  You are just human, like the rest of us.  There are a few moments that have made me feel like the worst mother in the world (but I’m not!).  Here are my top five:

Being late to pick up your child

What inspired me to write this post was a recent incident.  I pick my daughter up from school every day at 2.40pm.  Except on a Thursday.  Thursday is ballet day and all of last year, during my first year on career break, ballet was at 3.45pm but the girls were allowed go to the hall, get changed, do their homework while waiting so I didn’t actually have to pick her up until 4.45pm.  This year there is a new arrangement with the school which has resulted in her going straight into ballet class (with 5 minutes just to get changed) and then pick up at the earlier time of 3.45pm.

One Thursday, I took my younger two to the playground while passing the time before I picked her up.  I brought them home, gave them a snack and while they ate I got sucked into e-mails and online stuff.  Suddenly I looked at the clock on the laptop; 15:48.  I was already 3 minutes late for her and I hadn’t even left the house.  I was thankful for two things:

1. My husband was working from home so, having screamed up at him, I was able to run out of the house without having to drag the other two along.

As I drove down the road I could see other Mammies driving away from the school with their daughter’s in the car, already collected.  I arrived outside the school, parked in the set down area outside (which is actually a bus stop but used as a set down area during school drop off) and ran into the hall.  She was sitting on her own, on a bench, in the corner.  The next ballet class (for the older girls) hadn’t started yet and she greeted me with a “Where were you Mammy?”  All I could do was apologise and tell her I had lost track of time.  She instantly forgave me and said that another girl was only picked up 1 minute ahead of her so she wasn’t on her own long and they were only finished 5 minutes.

Nonetheless I felt awful.  How could I forget my child?  Of course these things happen.  Usually with better excuses than mine, like getting stuck in traffic because of an accident or bad weather.  Maybe it’s a rite of passage of parenthood that you will, at some point, be late to pick your child up but it doesn’t make you feel any less awful at the time.  I’ll be setting an alarm on my phone from now on! 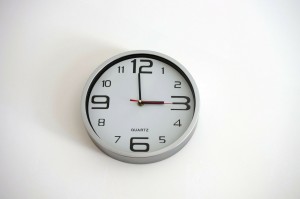 (Briefly) Loosing your child in a store

I lost my youngest child in IKEA a few months ago – just briefly, we got her back!  It’s a large store, it was busy and, like lots of kids, take your eye off them for a second and they are gone.  Or you’re gone and they don’t follow.  There is nothing worse than that stomach churning moment when you realise they are gone and you have no idea where they are, even for a brief second.  It’s like your insides do a 360 degree turn.

At least being late for your child you know they are safe.  When you cannot see your child, during that stomach churning moment, every worst thought goes through your mind.

I suspect many parents will have gone through this scenario, thought of all the awful what if’s, and felt a truly terrible parent but thankful all ended well which is usually the case.

When they run off and onto a road

Once babies become toddlers they love to run.  It can be hard to keep up. Strapping them in a buggy, while the best option, is sometimes hard with a wriggly 2 or 3-year-old.  I recall two very clear occasions when my kids ended up in the middle of the road.  Thankfully both times outside our house which is in a quiet enough estate not to have constant traffic outside it.

The first occasion was when my oldest was about 2-years-old.  She was like a coiled spring.  We opened the front door one day and she was out like a rocket – straight out onto the road.  Of course she knew no danger and she was so fast we could only run to catch her. We were blessed that there were no cars coming.

The second occasion was when my older two were playing in the back garden.  Myself and my husband were chatting at the open back door when I looked around I couldn’t see my little man.  I looked into our side passage where I could see the side gate had, accidentally, been left open.  I looked through our sliding doors and could see right through the house and out the front window where I saw his little head poking up at the bottom of the window as he toddled off through our front garden and towards the road.  I ran.  I managed to catch him just as he reached the road.

Our youngest lady is not immune.  While she has been better about not running off by learning from her older siblings we did have a near miss on the scooter one day.

Having to leave them when they are sick

There is nothing a sick child wants more than to cuddle up with a parent when they are not well.  However, when I was a working mother I have lost count of the number of times I have had to leave them.  There were times when I suspected something might be brewing but they ended up in crèche and hours later I would get a call to say they had spiked a temperature or times when they are sick and I have had to recruit a parent or in law to mind them or when we had our au pair ask her.  Of course all of these people were totally caring and competent in minding my sick child but the guilt of saying goodbye to them as their little pale, drawn face stared back.  Awful. 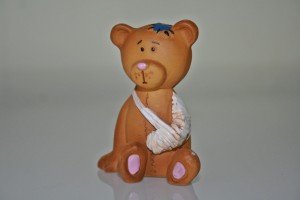 Not believing they are sick or injured when they really are

“Ah, sure you’re fine, off you go to school”

Cue phone call from school telling you that they are sick.

Or, if your child falls and you dust them off, tell them they are fine and get them moving again only to realise they have a massive cut with blood dripping down their leg or I have heard of parents later realising their child has a broken bone.  Oh, how bad do you feel in that moment?

Are there any other moments that make you feel like a terrible parent?  Of course the reality is that you are just a normal parent.

Get me to the school on time: 5 Tips for making...