A couple of weeks ago I posted about the Babytalk Festival. The time has arrived and the festival kicks off in the morning. One team who will be exhibiting at the festival is the iQ Content team who have recently launched a brand new iPhone app for Dad’s: Daddyo App.

The Daddyo App, designed by dads, for dads was released in December 2013 and is self-proclaimed as the survival guide for first time Dad’s. I was e-mailed about it featuring at the Babytalk festival and it caught my attention (you know I am an Apple Parent right?!) because it did ring true with me that maybe Dad’s don’t feel so comfortable picking up those baby books or joining in online forums to seek advice. They are all geared around the glowing mum to be. Maybe they need something geared towards them and maybe a little bit more subtle than walking around with Pregnancy books glaring in full sight. 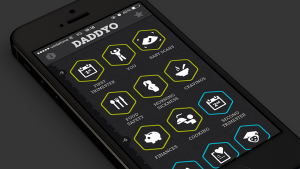 The app itself was designed and developed by iQ Content a Dublin based digital consultancy and the catalyst behind it was Tom Cunningham who was driven by his own first time dad experiences. The app has 42 topics covered from conception, to labour ward to the first six months of baby life including all aspects of life such as changing nappies, bathing babies and dealing with hormones!

The app is obviously not aimed at me as a mum but when it was highlighted to me I thought it would be great to alert my Dad readers who may wish to download it or of course maybe my expectant female readers may wish to give a proverbial nudge to their other half to get clued in to what they will need to know through the first six months of fatherhood.

The app can be downloaded from the App store at:

Even better why not get the app for free!! For a chance to win a download token just pop your details in the Rapplecopter form below. There are multiple ways to enter so pick as many or as few as you like!

Disclaimer: I was not paid to promote this app. I thought it would be of interest to my audience and I was given a download token to giveaway. The winner of the rafflecopter draw will be sent the token on the weekend of the 1st March 2014.