No doubt the concept of flashcards doesn’t exactly generate massive excitement but when the words “augmented reality” are put in front of the word flashcard it is a whole different ball game.  When I was contacted about Octagon Studio’s new augmented reality flashcards my ears pricked up.  They sounded exciting and intriguing.  I had to find out more.

Any regular readers will know that my kids are iPad and device mad, as I’m sure many 21st Century kids out there are.  I think it is great, provided there is some learning going on and this is exactly what you get with these new flashcards.

The cards arrived through the post box and were not dissimilar to a pack of playing cards in terms of size and packaging.  I must admit to grappling a little with the plastic wrapper around the packet.  There wasn’t a handy little pull thingy (not the technical term) but I got there in the end.  To be fair that was my only (very tiny) struggle because after that the cards gave endless entertainment. 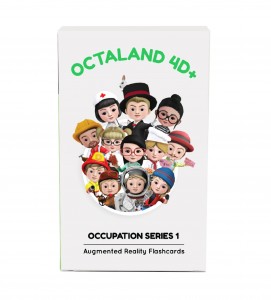 We got to try the Animal 4D+ and the Octaland 4D+ Occupation series 1.  The only pre preparation you need to do is to download the relevant app (which is free) for each set of cards.  While there is separate app for each set of cards it is only a once off job.  Once you have the app you are good to go.

We tried the animal cards first.  The first appearance of the actual card and it all looks a bit dull and dreary but once you open the app and hold the card in front of the screen everything comes to life.

It was amazing to see my 4 year old’s eyes light up and almost see her brain trying to figure out how this animal was in full 4D colour.  She kept looking behind the phone as if it was some kind of magic trick!  In a way I guess it is like magic because I certainly have no idea how it works, but works it does.  Not only does it instill the alphabet and animal names but gives a proper look at how the animal looks, sounds and moves around.

The other pack we were sent to try out were based on different occupations.  So A being Albert the Astronaut, B for Bertie the Builder, right through to Zack the Zookeeper!  I have to say these ones looked more appealing as standalone flashcards as they were in full colour but they too came to life.

They work exactly the same way: download the app for Octaland 4D+ cards, show the card in the screen area and watch the people come to life performing their differing roles.  Again, an excellent educational experience as the kids got to learn about different careers in a fun and interactive way.

Hearing the laughter (and screams as we hit the lion animal card!) was brilliant.  The cards were an outright success.  My kids thought they were just “so cool”.

If you would like to have your own Augmented reality experience I have a set of cards to giveaway.  Just enter using the rafflecopter below.

If you are not so lucky they can be bought for €10 per pack and make an ideal stocking filler this Christmas.  Learn more about them and buy them too on the Octagon Studio website.

Disclosure:  This is not a sponsored post.  All views are my own.  I was not paid to write this post but was provided with two packs of flashcards to test and a set to giveaway.

And the winner of the Trolley Bags is……..