With the weather turning very much Autumnal, we will all be looking for indoor activities over the coming months. A family trip to the cinema is always a winner.

I got the opportunity to bring all the family to the premiere of new Disney movie Alexander and the terrible, horrible, no good, very bad day. A film based on Judith Viorst’s 1972 book of the same name.  My youngest, who turned three last week, was only getting over the chicken pox and having been quarantined for the week it was great to have our first trip out.

The movie was screened in the Savoy Cinema in Dublin City centre. It’s always lots of fun and a big adventure to take a trip into town.

I was a little nervous about bringing them to a non-animated family movie but had them adequately prepared that there would be ‘real’ people and not cartoon characters on-screen. It was rated PG but was hopeful that there would be nothing shocking in it. 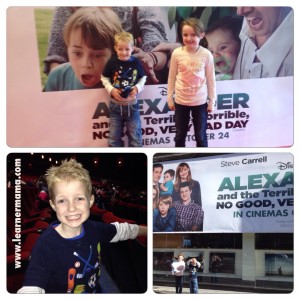 I was not disappointed. The movie was absolutely fantastic. Steve Carell and Jennifer Garner convincingly play a husband and wife team and parents to four kids including Alexander (played by Ed Oxenbould). They, unsurprisingly, have a terrible, horrible, no good, very bad day which Alexander feels is his fault.

Without giving the plot away let’s just say I laughed a lot, as did my husband and kids. My 3-year-old got a little fidgety – more a reflection on her age then the film.

The film is surprisingly uplifting with the message that we all have bad days, but they serve to allow us appreciate the good ones.  We left the cinema with smiles on our faces. I asked the kids what they thought. My little man declared it ‘a really beautiful film’ and my oldest said it was ‘cool’. She confessed she had thought it would be more boyish (because of the name) but she loved it. I think she felt quite grown up going to a non animated movie.  Even my three-year-old has been all talk of the film since coming home, recalling her favourite scenes and I was stunned that she remembered so much.

Mammy and Daddy had a great time too. Very often parents are left enduring some mind numbing movies when accompanying their kids to the cinema, but Alexander and the terrible, horrible, no good, very bad day was fun for all the family. It’s certainly not a movie for the film buffs but as a family we were left having had a not terrible, not horrible, very good day.

Alexander and the terrible, horrible, no good, very bad day is in cinemas in Ireland 24th October (it was released earlier this month in the US).  A great choice for the family if you fancy taking in a movie during mid-term break.

Disclosure: I was invited by Disney Movies Ireland to the premiere of the movie. I was not otherwise compensated for this post. All views are my own (and my kids).