If you managed to catch the first installment of Disney’s Planes series you will know that the main character, Dusty Crophopper, is a crop duster aeroplane who had ambition to win flying races. The first movie sees Dusty take to the skies against fierce competition beating both his rival Ripslinger and his own fear of heights with help from his friend navy plane Skipper Reilly.

Dusty is back in the new installment – Planes 2: Fire and Rescue. I was thrilled to get the opportunity to bring my three kids to a special preview screening of the new movie. Especially a matter of days before we all head off on a plane ourselves!

I was a little nervous as it was the first time to bring all three of the kids to the cinema by myself and with a 7pm showing on the other side of the city I was worried that tiredness might get the better of them and they are certainly no fun when tired.

We departed at 5.30pm on what was a beautiful day in Dublin. After a petrol pit stop we hit the motorway. We arrived in Dundrum Town Centre at 6.10pm and made our way into what is one of the most up market shopping centres in Dublin. I had never been, so it was lovely to see the centre briefly as we made our way to Movies @ Dundrum. We got to the cinema by 6.30pm and stopped for a quick (bad) photo opp. We loaded up on popcorn and made our way to our seats. 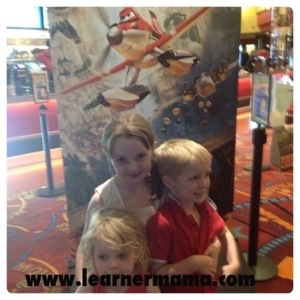 We were seated by 6.45pm and the kids were delighted to discover a goody bag from Gala awaiting them.

The movie was scheduled for a 7pm kick off. One lesson of going to the cinema with children is to arrive as the lights are being dimmed. Having them sit, waiting for the start is painful. To make matters worse the film was a few minutes late kicking off but all was redeemed as the Director of the film Bobs Gannaway and the producer Ferrell Barron were in town and came in to say hello and tell us about the movie.

After much anticipation the film started. With a run time of 84 minutes it got my vote before I even saw the movie. Any movie more than 90 minutes is difficult for young kids so I was hopeful my lot would stay the distance.

The lights had barely gone down and my 2-year-old needed the toilet. Once that distraction was out of the way we sat back and enjoyed the show. Without giving the plot away this time around Dusty, suffering with a dodgy gearbox, is forced to trade flying races for being a wildfire air attack plane.

We watched as Dusty undergoes training with Windlifter, Lil Dipper and the Smoke Jumpers. The climax involves a very large wildfire. 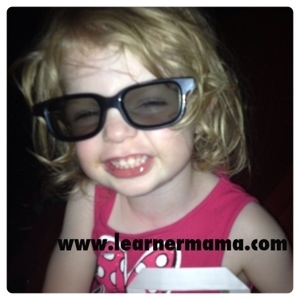 There are some scary moments (if you are a child). My 7-year-old loved the movie (giving it 10 out of 10) but was left a little scared with one particular scene near the end.  My 2-year-old was not so keen on the fire which of course I have taught her to be weary of.

It is an unashamed spin-off of the Disney Cars movies. That said it was in my view a nice little movie which flowed well and kept the interest of my three (although my little one was almost asleep on my lap by the end but that was a reflection of the time, not the movie).

One for all the family but if you have any particularly sensitive kids be warned – they may find it a little un-nerving at certain points.

When the lights came on we made our way out and I did a quick change of each of them into their pyjamas and we made our way through the mall back to the car. Way past bedtime we arrived home and they fell into bed.

Mammy poured a glass of wine to toast her first solo cinema trip. On the other side of the city too! Great evening all round.

Planes 2: Fire and Rescue is in cinemas August 8th and if you want to catch a glimpse of what it is about check out the trailer.

Disclaimer: I was invited by Disney Ireland to a Preview Screening of Planes 2: Fire and Rescue. I was not in any other way compensated for this post. All view are my own (any my kids).

A wonderful customised mug from Colorineswonderful.com

Win a personalised Christmas book for your child from Digital Scribe...