Christmas is such a lovely time of year.  It was in the past, it is now and I hope it will be for all Christmases of the future.

Dr Hows Science Wows has shared her memories of Christmas times gone by and has invited us to do the same. 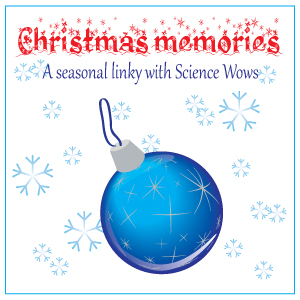 If I roll back to when I was growing up Christmas was exactly as it should be.  Magical.  I have very fond memories of getting ready for Christmas.  In our house the start of Christmas was usually signalled by a move of our TV in the sitting room up to the “good lounge”.  The lounge sat mainly idle all year (except for occasional entertaining) and moving the TV meant the festivities could kick off.  This would include putting up the tree, opening a box of Afternoon Tea biscuits (can you believe they have ditched the biscuit with the jelly on top; scandalous!) and a tin of the years chosen chocolates which were usually Quality Street or Roses.  Please don’t say you like the coffee flavoured ones.  We always ended up with a small supply of them at the bottom of the tin.

There was an annual visit to Santa and from what I recall it was usually a trip into town to see him either in Arnotts Department Store or Clerys Department Store.  The day usually also meant checking out Switzers window which was always done up beautifully and was a yearly attraction until they closed.  Brown Thomas, who took over the store, still do a beautiful window but to me it will never be the same.  Maybe because I am older or maybe because, well, it’s just not the same.

Christmas Eve was always the same.  Early to bed, half anxious, half delirious.  I recall waking on Christmas morning at ungodly hours of the morning and recruiting my siblings to sneak up to see had Santa arrived.  The absolute fear as the door creaked open which turned to sheer happiness with the realisation that he had indeed arrived with a stash of presents; a vivid memory of spotting the large box containing the much sought after Sindy Range Rover.  One year we even convinced ourselves that the dark stains on the rug were Santa’s footprints!

There was always a fry, always Mass, always Top of the Pops before (once we were older) breaking out the first drink of the day (usually a Baileys!).

We also had three Christmases living in Zimbabwe.  Different but just as memorable.  Summer rather than Winter, warm and sunny rather than cold and cloudy.  There were dips in our swimming pool and barbeques but we still had a tree, decorations, presents from Santa, eating and movie watching.

There are then the Christmases between growing up and having my own family.  Mostly late teens/early twenties stage.  Christmas became all about the social side of it i.e. going out a lot! There were many drinks consumed and many hangovers suffered.  I still slag my husband off about the one Christmas, when he was still living at home, that he was unable to eat Christmas dinner.  In fact I’m not sure he was really able to get out of bed as a result of being severely hungover.  I don’t think I have ever seen him as worse for wear since!

Now that I have my own family we are trying to carve out memories that will last for their lifetime.  Of course the first memory we have as a family was the sudden arrival of our first born three days before Christmas.  I’m not sure it gets much more memorable than that.  Although as the years have gone by, and two more babies arrived, we seem to have started to develop some lovely family traditions.

A family trip to our local garden centre to choose the tree before Daddy drops us home before going straight back to pick the tree up and fit it in the car; my oldest getting responsibility for the star (although I suspect that tradition may be challenged over the coming years), a birthday party for my oldest marks the real start of the festivities which include a visit to the live crib on Christmas eve and lunch in TGI Fridays in Temple bar before heading home to prepare for the big man’s arrival.

Christmas Day there are presents to be opened, Mass to take in and a large fry to consume before heading to visit either my parents or in-laws for a quick hello before heading to whichever pair is feeding us (and then doing the opposite the following year).  We have yet to cook a Christmas dinner in the house we moved into together over a decade ago.  Although that may change next year as we move to a new chapter of Christmas memories.

With any luck our future Christmases will create as many wonderful memories as those in the past.  In the meantime I am going to sit back, relax and enjoy a Christmas break and so I wish you all a very Merry Christmas and all the very best in 2015.

Now do go and check out the other fabulous memories shared in Dr Hows linky and indeed join in if you have some Christmas memories to share.

The Career Break: Half time report

When mammy gets sick!