PJ’s playcentre is a playcentre in Balbriggan, North County Dublin. My first ever visit to the place was in 2009 when I was 39 weeks pregnant with my second child and my first wasn’t with me. That may sound strange that a heavily pregnant woman was hanging out in a playcentre but I was actually going to a coffee meet up with some lovely friends I had met online and their kids were playing there.

At this point my oldest was just over 2 years of age and we had never brought her to a playcentre. I guess as we were working full-time and weekends were about shopping, housework and visiting grandparents playcentres were not on our radar.

Of course when I got there I felt so guilty that she had never been. The place was amazing.  A large playframe with swirly red slide and the central attraction of the wavy blue slide.  It also has a toddler area for the smallest of the little ones. Next coffee meet up I had a new baby and I brought my 2-year-old. She adored it and with my baby sitting happily in his seat I enjoyed a coffee in the lovely airy coffee and eating area and caught up. I was sold!

I cannot count the number of times I have been since but when my daughter was turning four we decided to let her have a party with her Montessori friends. She chose to go to PJ’s Playcentre. I had heard good things about parties there and we weren’t disappointed. We chose a hosted party and so we could literally sit back and relax while the kids had a ball! The only thing that went slightly awry was we booked the Panda (the playcentre mascot which was a staff member dressed in a full size panda suit) to come join the party and my daughter was petrified of it!

The following year she had started school and with a new group of friends she chose to have her fifth birthday party in PJ’s once again. It was a great hit once more (and not a Panda in site!).

By the time she hit six we reckoned she should try somewhere else but in the meantime we still visited and my little man was reaching party age. He declined having a party for his fourth birthday but turned five in March and he not surprisingly chose PJ’s Playcentre and it was a resounding success.

The parties we have chosen involve checking in at the front desk where you get assigned your party host. As each child arrives there is a box for shoes, coats and presents so everything can be kept together. The party host checks each child in and if you are going with the hot food option will take their order and put a little letter on the back of their hand so no one forgets who is having what. 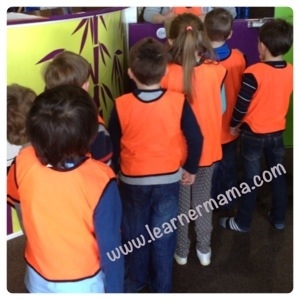 The party is assigned a colour and each child wears that colour bib so it’s really easy to see who is from the party. Once checked in, it’s party time. One hour and half on the playframe while mum and dad and any other parents who choose to stay can sit down at a reserved table and have a coffee. There is juice on the table too for thirsty kids looking to take a breather.

There is a go on the go-karts for everyone before heading upstairs to the Disco room for a dance and then heading to the other party room for food and cake. You can bring your own cake or they do a rather nifty little ice-cream cake (for extra) which works out great. 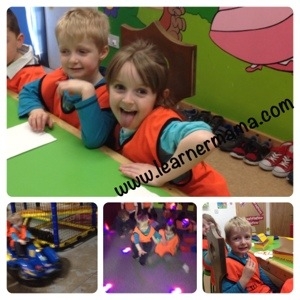 Before everyone goes home the shoes and jackets are laid out for the kids to put on as they leave and they are given a party bag which is included in the package.

PJ’s Playcentre really run a slick operation and having been to a few centres around the area this is my favourite. No doubt my littlest lady will want a party or two there as well so I think I will be a regular visitor for another few years to come!

If you are thinking of having a party or just want to let the kids run free for a couple of hours I would highly recommend PJ’s Playcentre.

Note: I was not paid for this post, nor compensated in any way.  All visit and parties have been fully paid by me.

Our day out at the Irish National Heritage Park [with Slideshow]