It was freezing today.  After three pick ups involving two walks in the bitter wind I decided I was staying put in a nice warm house.  So what to do with the kids?  There was no homework to keep them occupied so to get them a little more festive (not sure that is possible!) we decided to dig out the beads and do a little making.

Now let me say I am not a crafty mum.  My creative juices are very often totally dry!  Last year our au pair introduced us to Hama beads.  I had never heard of them before but she was a creative genius and they worked a treat to thaw out our oldest who was taking the adjustment to mammy going back to work hard.  We are all now hooked.  It was really only my oldest that took to them at the time.  My 1 year old and 3 year old were a little young!

Roll on over a year and my 4 year old has started to take an interest and my now 2 year old will dabble for a few minutes (but we do have to be careful as they are only suitable for 3+ and they do pose a choking hazard).

While we do have many actual Hama beads we also have a big tub of beads from IKEA which were really good value. They also do the pegboards.

We also have downloaded a great app on my iPad called Perler beads which gives great inspiration and the kids can just copy the designs.

Given the time of year we decided to make some festive decorations.  Inspired by last years creations by the au pair.  Well not so much inspired but darn right copying! 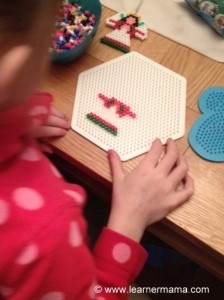 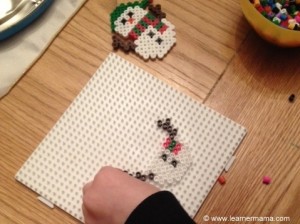 Two of my three sat quietly for well over an hour coming up with their creations.  And I have to say I was very impressed.  Obviously I did the ironing of the beads afterwards but they had little input otherwise.  I even managed a creation of my own! 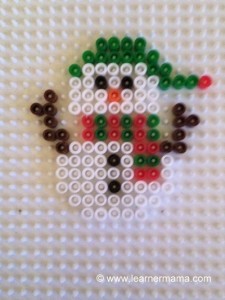 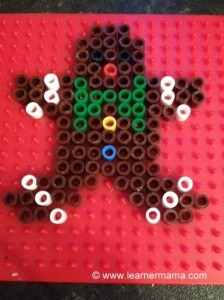 They are going to gift their creations to their teacher tomorrow which is, I hope, a nice gesture rather than a box of chocolates, candle or bottle of wine. 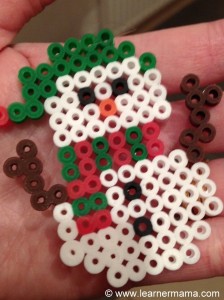 We have our ones from last year and this years new one hanging on the tree! 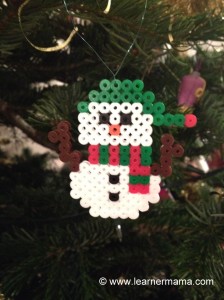