It is over 10 days since I last posted here.  Yikes! Time flies when you are having fun.  It has been an exceptionally busy 10 days.  The build up to Christmas, Christmas itself and here I am in that funny time between Christmas and New Year.  A bit of downtime, a bit of pondering the year that was and a bit of setting hopes, dreams and aspirations for the year to come.

We have done lots.  Eaten lots. Drank lots (probably too much but isn’t that what Christmas is all about!).  Rather than bore you all with a run down of my busy week I have picked my top five favourite parts of the last 10 days – my Christmas 2013 highlights!

1. Girlie trip to the hairdressers

My oldest daughter has long hair.  With the exception of one or two trips to Kiddie Kutz for her first couple of hair cuts I have cut her hair myself.  I had promised to bring her to a “proper” hairdressers before she went back to school but never got my act together to book it so we agreed that we would arrange it for her birthday.  Of course a week before her birthday I still hadn’t booked it so thankfully my husband arranged for both me and my little lady to take a trip together on Saturday 21st December – the day before her birthday. It was fun and very nice and chilled.  My daughter wanted a fringe.  I wasn’t so sure.  She got a fringe!  I have to admit she looks so cute with it – although a bit too grown up for my liking!  The staff in the hairdressers pampered her beyond belief – fed her sweets, gave her grown up magazines and I am certain she felt like a superstar.  I got the full treatment as well and we both walked out feeling great! I guess I have just started something that will last a lifetime – maybe a new Christmas tradition! 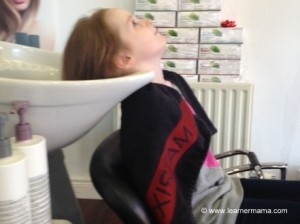 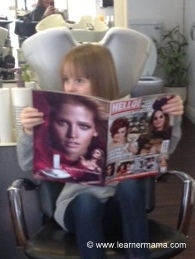 Of course all the pampering was not just for Christmas but for her birthday too. Seven years ago my little lady came catapulting into our world.  And she was the best Christmas present anyone could ever ask for.  Her birthday was Sunday 22nd December.  She had asked for an American Girl Doll – something she had spotted on her numerous trips around Youtube.  Of course they are not available in Ireland but we were very thankful my husband had to travel to New York with work in November and managed to pick one up.  She bounded into our bedroom eager to see the much longer for gift.  My husband, bleary eyed, presented it to her before I asked what time it was – 4.50am!! BACK TO BED!  She was sent packing (with said gift) and got up to play later on in the morning.

For her party she wanted to go to Nzone, Kinsealy.  About 2.5 weeks before the party my daughter asked me to send out the invites – I said I will do it at the weekend – 2 weeks notice is plenty.  Of course the evening before I was due to issue them in came an invite from a fellow classmate.  Her party was being held on my daughter’s birthday and at the same time. Disaster. I had two choices.  Go ahead with the fear that no one would be there for her or change the date / time.  After much pondering and great advice from my fellow Irish Parenting Bloggers I decided to stick to my plans and issued the invites.  We got enough confirmed to go ahead with the party.  Judging by the smile on her face I think she had a blast! 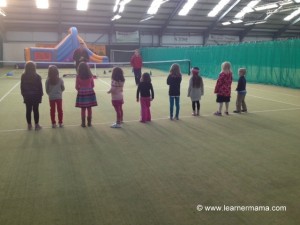 Homeward bound and round two as 9 adults and 4 kids decended on our house for the family party.  A great day had by all accounts and we all fell into bed that night. 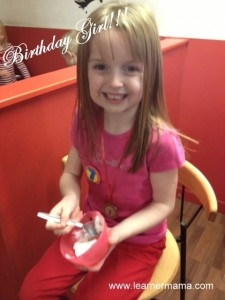 3. Surprise night on the town!

Monday we had agreed we would go Ice skating which was to involve me bringing kids into town to meet my husband who was working a half day.  I had planned to go on the train but disaster struck when I realised my car keys were locked in the car and we certainly didn’t fancy heading out for the afternoon with them in there.  One smash and the house contents and car could be gone. Husband had to come home before a quick turnaround to make the train I would have been getting on my own.  Crisis averted and then when on the train husband broke it to me that we would not be coming home.  Not only were we going Ice skating but we were checked into Bewleys Hotel in Ballsbridge for the night.  I stood in shock on the train – what about clothes? cosmetics? He had gathered as much as he could sneak out so we could make do.  It had been a while since he had shocked me as much.  We had a blast. Went ice skating and to Funderland, had dinner in the hotel, crashed out in the room for the night before heading into city centre to visit the live crib, complete our Christmas shopping and have a lovely lunch in TGI Friday’s in Fleet Street – something we had done the previous year and is no doubt going to become another Christmas tradition in our house! 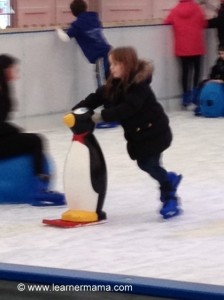 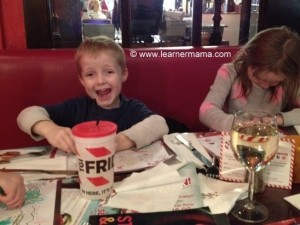 The day they had all been waiting for.  Christmas morning.  Of course we expected an early morning call but we were shocked when 7.30am arrived, our 2 year old woke up and we thought where are the other two?  After about 10 minutes I thought, I’m too excited, I’m waking them so popped into their room where my oldest was just sitting up rubbing her eyes – no doubt the noise of me and hubby talking and pottering about woke her!  I then proceeded to wake my son.  They cautiously headed down the stairs.  I think they are always afraid Santa is still there.  I captured the moment on my phone.  Makes all the preparations worthwhile!  A few seconds of the video capturing the first moment of realising Santa has been – I’ve spared you the rest!

One of the greatest part of Christmas is spending time with family.  When myself and my husband got together we spent Christmas in our own families but since getting married we have alternated Christmas dinner with each others family.  We are lucky we are both from the same town and both parents still live there so we can make a quick call to one set of parents before settling down to Christmas dinner in the other, stay over and then have St Stephen’s Day dinner in the opposite house, another sleep over and then home.  This has worked for us for the last few years but I think now with three kids we may look at starting our own family dinner……in a bit anyway!

Part of these trips involve seeing our kids cousins.  There are 6 cousins in total and it is lovely to see them playing.  Since myself and my husband had the first two grandkids on both sides our oldest two are the ring leaders with the others only toddlers and babies.  Am sure in a few years there will be even more mayhem with my three in the thick of it.  But it is lovely especially when we get to see my brother’s two kids who live in UK.  When my oldest and his daughter get together they are like long lost friends reunited.  It’s so lovely.  A very special time at Christmas.

So now it’s all over for another year.  Hope everyone had a great Christmas too.  We await an New Year.  Thank you to you all for reading this year and I look forward to seeing you all on the other side.

The black out (and other life updates)